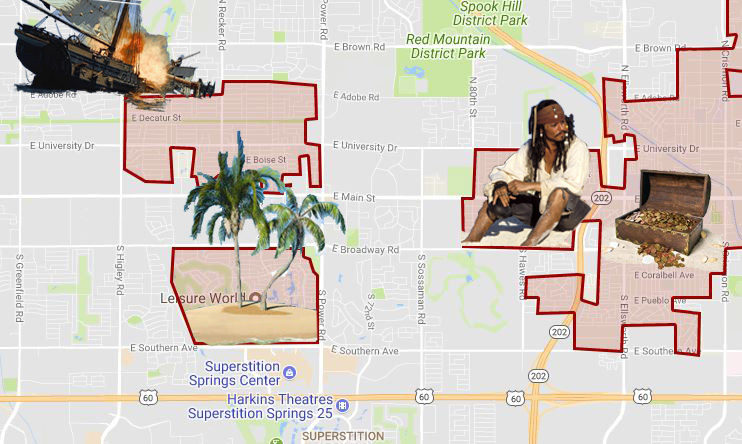 (and how to explain it to sane people)

Most Valley residents understand county islands in only a general sort of way. But even if you understand them completely, you can’t explain them in a way that makes them sound rational to someone who comes from a civilized urban area. This phenomenon would never happen in Boston or St. Louis or Minneapolis – but come out to the wild west, getcha a big ol’ chunk of rugged individualism, toss in some all-American enterprise, a nod from a landowner-friendly legislature and the rules change.

For many years, Phoenix and its satellites have been among the fastest-growing cities in the country. When the various city limits approached a landowner’s doorstep, Arizona law allowed certain areas to be excluded from the expansion. These were typically agricultural lands or land held by investor/developers that didn’t want the burden of city taxes and regulation . These areas of exclusion were quickly, sometimes immediately surrounded by the annexation process, leaving them as unincorporated areas of the county in the middle of what was now the city. While they might have been given city addresses because they are served by the local post office, they have no official city status and residents, who may feel like they are part of the surrounding city, cannot vote in city elections.

This non-city status has all kinds of implications, as traditional city services like water, sewer, trash, police and fire protection are not provided and must be purchased a-la carte. This can mean city sewer and water on one side of the street, septic and wells on the other – or a 911 call to the city police who suggest you call the county sheriff. The solutions are varied, including purchasing services from the city, private water, sewer and trash companies, and paying for fire protection from the Rural Metro Fire Department. This can be particularly tricky because we have a core belief that fire protection is a basic right. However, if a county resident doesn’t subscribe to yearly fees for fire protection and has a house fire, not only will they suffer loss from the fire but they are liable to pay for the fire department response, which can be thousands of dollars. All of this creates obvious public safety issues which beset both the island residents and the surrounding communities.

Explaining these anomalies to the influx of visitors and new residents – primarily from the Midwest and Canada, is a real challenge. For Canadians, the possibility of having a hole in their country (the threatened session of Quebec) is easier to understand than a county island. Try to explain to one of our earnest Canadian friends how our cities could have these irregular holes in them, not caused by any cultural, racial or language differences but by the whim of a previous landowner, where the rules are different from one side of the street to the other, and it just confirms their suspicion that Americans are barking mad and increases their resolve to never lose their Canadian citizenship. Of course they still buy our houses and come back every winter to enjoy our weather – whether the house is on a county island or no – so there’s that. But make no mistake, there are islands that consistently attract their interest and investment, and islands that never will.

Some major county islands like Sun City, Sun City West, Sun Lakes or more modest developments like Leisure World, are virtual cities unto themselves, highly regulated and tightly run by their HOAs. They are indistinguishable, perhaps even superior, to the incorporated cities around them. On the other end of the spectrum, some islands are random collections of trailer parks and manufactured home lots with aging properties and no visible rehab or influx of new units. There is also no oversight or neighborhood standards. It only takes a few willfully negligent occupants whose blight continually affronts their neighbors (who have little or no recourse) to affect everyone’s quality of life.

I had a listing in a small, nicely laid out newer development – a cute little house, priced right with a buyer ready and anxious to commit. He made one last early morning stop at the property on his way to work and was confronted by the gang task force, making a raid in the county island across the street. I don’t need to mention he immediately backed out. The homeowner was not surprised. He’d seen it himself a couple times before. Are county islands breeding grounds for crime? Absolutely not! But if there is a problem, and this one seemed persistent, it’s much harder to deal with. Security has to come from the county sheriff who may be miles away rather than city police who literally surround the area. And without city zoning and code enforcement, there is no municipal leverage for the neighbors. Unless something is an obvious health or safety hazard, there are no county laws against run-of-the-mill blight. The spill-over effect of this older, degenerating neighborhood was affecting property values in a much wider area.

County islands provide their occupants with lower taxes and less government oversight –  traditional Arizona values, up and down the social spectrum. But while this rugged individualism may appeal to someone’s sense of romanticism and fuel their entrepreneurial ambitions to build up-scale lifestyle communities, it’s also a trait claimed by those people who insist on their right to have a sofa out in their front yard so they can sit in cushioned comfort, drink beer, watch the weeds grow and keep an eye on their disabled vehicles scattered around the lot..

So – on the one hand, you have an upscale, well-run community whose thousands of homeowners pay lower taxes. On the other hand you have individuals who can live cheaply with minimum interference in whatever simple (or alternate) lifestyle they choose. If there’s a problem, it’s that the county island works for both of these types and they feel they would be giving up something that was valuable to them if the city took over. While a great many people would rather be city residents like everyone else, there will always be holdouts who don’t

It takes fifty-one percent of the residents of an area to petition for incorporation into the surrounding city. Speaking as someone who can’t get three people together for breakfast, I think this is a very high bar. And it’s not just a resident initiative. Does the city really want or can they afford to take on the additional burden for services and infrastructure that a county island would require? Some cities allow individual properties to be incorporated and chip away at the edges of the islands, which is probably why some islands take on the irregular shape of gerrymandered legislative districts. Incorporating large tracts or entire county islands is somewhere between daunting and impossible. The situation is unusual (OK, it’s an urban planner’s nightmare), but we’ve learned to accommodate it. Arizonans will be living with our crazy county islands (and trying to explain them to quizzical newcomers) for years to come.