How to Pronounce Germann Road 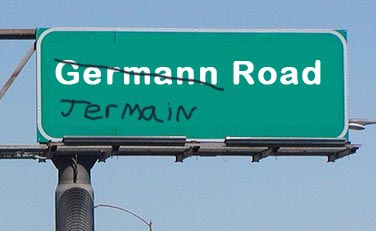 Newcomers (and not-so-newcomers) to the Valley are continually perplexed by the apparent disconnect between the spelling of the street sign they’re looking at and how it is pronounced by newscasters. Where is “Jermain Road” anyway? This sign says “Germann”. It’s a head-scratcher, but one we’ve apparently got to get used to.

Unsurprisingly, Germann is a family name and the street honors an early settler family who owned land and lived in the Queen Creek area. Since there’s no surviving family member to chime in on the debate, the presumption is that’s how the local family pronounced it and we’re going to go with it. That doesn’t mean it’s right, just that there’s nobody to argue with. You can find a lot of examples of the name that are pronounced more predictably, including “Har-mahn” and “Gr-mun” and “Ger-man” which make even more sense if the name is what we call Pennsylvania Dutch in origin – the family came from “out east” after all.

To understand how you could possibly get from jer-man or gr-mahn or gare-mahn to jer-main, you have to step into the way-back machine and dial up a much earlier era. Language is a living thing, always in flux, but go back to the middle ages and it’s practically liquid. Between rampant illiteracy, conquests and shifting national identities, writing was various and almost accidental at times. Consider that even Shakespeare signed his name at least six different ways, none of which would lead you to the current pronunciation, and you start getting the picture. It’s not a leap to think that a family might take on (and hand down) a particular pronunciation of their name – damn the spelling.

My personal theory, which has absolutely no basis in fact, is that, early on, the family was located in the Alsace-Lorraine region in Europe which has been swapped back and forth between France and Germany at least four times. At least two of those times, a Germanic name would have gone over a lot better if it had a French pronunciation. Hence, Germann became Jermaine (silent e added for Francophiles) – and they stuck to it, despite all evidence to the contrary.

As for us head-scratching Valley residents – just be grateful we didn’t have more Gaelic or Welsh immigrants. Dalziel = “dee-ell”. Siobhan = “Shi-vahn”. And my personal favorite: Leicester is how you spell “Lester”?. That’s just wrong!